How Trauma Affects the Brain 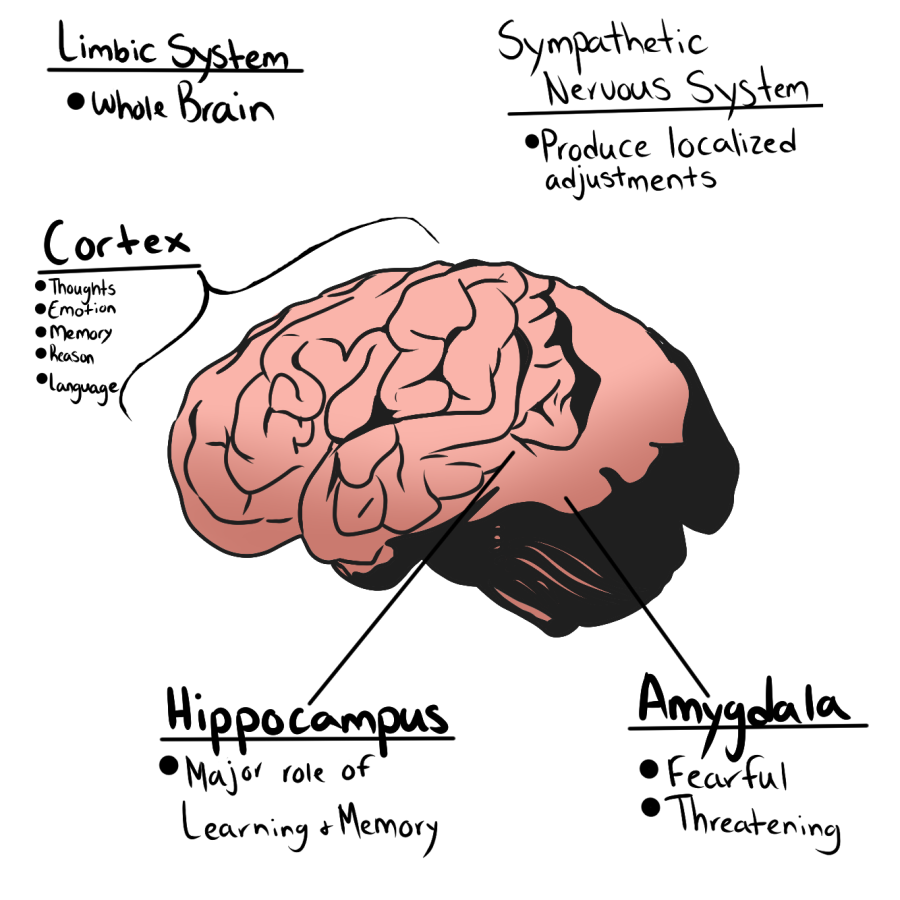 Brain diagram labeling the parts in the brain affected by trauma.

“I trained with an institute out of Detroit and I love the way they say it, the way they look at it. One of the things they say is “Trauma is not just an event, its also an experience.” And what they mean by that is, the harm done by trauma, is not only the result of the thing in simple trauma or the things in complex trauma that happened, its also the impact, the experience that it has on the person as they live the rest of their life.”

According to Matt Teegraden a social worker at Arvada High school, trauma impacts the way a person sees and experiences themselves, others and the world. Seeing and experiencing is not just about a persons personal beliefs of themselves, others and the world, it changes the way they physically experience the world moving forward. And once that person is able to work through their trauma, not only are they able to understand how those beliefs and experiences came to be but now their in a different place, have different skills, and then can start experiencing themselves in the world differently.

There are four primary parts of the brain that are impacted with trauma, the limbic system, the amygdala, sympathetic nervous system and the cortex.

The limbic system is the part of the brain that controls fight, flight, freeze or fold.

The amygdala sets off a ton of stress chemicals and hormones that go to the body and activate the sympathetic nervous system.

The cortex is the rational thinking part of our brain.

When the limbic system gets activated its harder to access the thinking part of our brain (the cortex). Its kind of like it goes away for a little while. So we are stuck in a reactive or survival place until we calm down.

[Link to the full interview with Matt Teegarden]


Sasha’s interview
Question 1: What is your name?

Sasha: My name is Sasha Barron.

Sasha: Yes, on May 7th about two and half years ago my school was shot up, there was an active shooter, and I’ve been through other instances with guns-

Question 3: How is your life different from before and after it happened?

Sasha: My life is a lot different now since it happened; I feel like my life before was kind of simple and I wasn’t really worried about much, then after it happened I just found myself being very anxious and cautious about everything and always just being aware of my surroundings because I’m always fearful of whats gonna happen anytime I go out of my house. I just am always scared and it’s kind of just me always like missing a lot of things because I’m so scared that things are gonna happen just throughout everyday life, just I’m always worried of when it’s gonna happen again. And before it was just very simple like, I just went about my day, and I didn’t really care.

Question 4: How would you compare your life to anyone that hasn’t gone through that?

Sasha: I know other people go through different things and do have anxiety  just throughout different stuff but for different people who have gone through gun violence or like trauma like that, I feel are normally more cautious and just have like a different relationship with guns after.

Question 5: Have you gone through any other type of trauma?

Sasha: Yes I have a lot of childhood trauma and different trauma from different instances I guess, of either like emotional, physical or sexual abuse throughout my life, I’ve been assaulted twice and just there’s a lot of different things that have traumatized me and I still have a problem with today.

Question 6: How is your life different from before and after it happened?

Sasha: Yeah, like many different parts of my life have just now been affected like just some with relationships now I find some things are just harder and I feel like I overthink a lot and just have like a lot of trust issues with people and letting people in, and I just kind of, anytime I hang around people with like anybody, I’m always like really worried about if their having fun, if they actually want to be there and aren’t I guess using me or anything. And also like after sexual abuse it was just really hard to honestly just get up, but even just still look at yourself the same and still like get up and be motivated to do anything. Yeah so, I feel like there have been a lot of aspects of my life that have been affected from all this different trauma, and now i just worry constantly.

Question 7: What is your perspective on life after going through that?

Sasha: I feel like it has changed my perspective, because again I feel like before everything in my life has happened, I just had a simple little life, I was just going a long like never really worried and you know I just lived and was happy and then everything else happened and I kind of have gotten like a lot of anxiety and… different things and now I’ve almost-like, I’ve seen a lot of bad in the world. You know what I’ve been through and I just always feel like like I’m seeing the bad parts of everything and thats just how the world is you know, there’s a lot of bad stuff, and now I feel like its just harder from me to like really try and see the world for better things and look for the good things in life because like I know so much bad so I’m just used to the bad, so it can be very hard to find the good things, and look at as life and the world as like… positive in some aspects.
Donovan’s interview
Question 1: What is your name?

Donovan: My name is Donovan Lucero.

Donovan: I have not but I do know a few people who have.

Question 3: How would you compare your life to anyone that has gone through that?

Donovan: I can’t speak for everyone of course but i know especially around the holidays that it gets harder cause of PTSD, and fireworks and stuff. I myself don’t have to go through that, but seeing my friends go through it and and other people, it’s just hard knowing that i can’t do anything and that i don’t know… i wish i could just help more.

Question 4: Have you gone through any other type of trauma?

Donovan: Yes I have. When I was 5, i was diagnosed with cancer, specifically leukemia and I mean it hasn’t affected me like horribly, I don’t have a ton of trauma from it but just going to the doctors or getting a shot or whatever it’s just always a little- not sad but I don’t know, it just reminds me of it and it’s not- it wasn’t a great time of course in my life. I’m glad I was young so I don’t remember all of it but that and also just family arguments. Not all the time but there have been a lot of bad ones. It’s very stressful so I do, when ever people argue I get anxious and stuff.

Question 5 : How is your life before and after it happened?

Donovan: Well before, I don’t know. It was pretty much just like everyone else. Nice, regular childhood. After though I will say there are good and bad effects it has had on my life as a whole. I mean I wouldn’t be who I am today had I not gotten cancer and I probably wouldn’t know a lot of the things I know this day because of it. I just think while it has given me some trauma, that it also has taught me a lot and like I don’t know were I would be, if I would be a completely different person or what. So, it think it was good and bad that it happened and without it.. I just wouldn’t be who I am today.

Question 6: What is your perspective on life after going through that?

Donovan: Well, it’s kind of a complicated question because at the time too when I was first diagnosed withe cancer I was a child. Very young so my perspective kind of changed regardless. But I’ve learned a lot since then, Its been an eye opening experience for sure. I’ve learned that life is way more fragile than I thought it was. And just more, I don’t know.. just different struggles that everyone goes through whether big or small, that everyone has their own struggles of course and I don’t know, I’ve just learned a lot. I take a lot more time to appreciate small things in life now and to learn more. As much as I don’t like school, just to learn more about topics I’m interested in and also just in general. It’s changed my perspective a lot.
Gabbi’s interview
Question 1: What is your name?

Gabbi: My name is Gabbi Wilkins.

Gabbi: No I have not.

Question 3: How would you compare your life to anyone that has gone through that?

Gabbi: I’d consider myself lucky because i haven’t gone through that.

Question 4: Have you gone through any other type of trauma?

Gabbi: Yes I have, I have a lot of trauma related to family lose and grieving. Like when I was a baby, my father died so thats made it hard growing up.

Question 5 : How is your life before and after it happened?

Gabbi: I grew up without a father figure in my house so that kinds sucks..

Question 6: What is your perspective on life after going through that?

Gabbi: Well I was a baby, but I think that life isn’t fair.