Student Takes Action During an Emergency 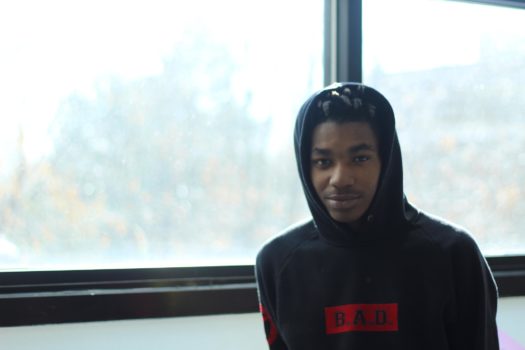 Some students are academically gifted. They’re extremely smart in the classroom and are able to solve problems at a glance. Others are more athletically gifted students that are recognized champions within the district. However, in junior Tydarrien (TJ) Bostic’s case, he is extraordinary because he saved a life.

“I was walking to the bus stop and a woman came across the street from the Dairy Queen. She ran across and was like ‘Can you help me? Can you help me?’ I didn’t know what was wrong and she was crying, so I ran across the street and I looked at the car where her husband or boyfriend was,” Bostic said. “I pulled him out of the car and then another random lady helped me pull him out too. After we pulled him out, we just gave him chest compressions until Officer Walters came since he was the closest cop and he helped us until the paramedics came.”

According to Bostic, he knew the man was having a seizure because his grandfather used to have seizures a lot before he passed away. The man had also sustained a few minor injuries from when Bostic and the other woman had pulled him out of the car.

“When we brought him out of the car, I think his head was bleeding a bit on the back from when we took him out,” Bostic said. “He was pretty heavy, so it was kind of hard to get him out of the car and his head hit the ground. I probably would’ve just took better care of his head, make sure it didn’t hit the ground so nothing else would’ve happened.”

Once the incident happened, Bostic didn’t have time to stand around and think about the best course of action to take. He just knew it was the right thing to do in another person’s moment of need.

“I wasn’t really thinking about it at the moment. I was just trying to hurry up and help people. I saw he needed help and she called me over there and I just went. I wanted to help him, so that’s what I did,” Bostic said.

Dealing with situations like these can be taxing on someone, especially if that person is constantly dealing with these kinds of circumstances. For Bostic, it was particularly hard considering it wasn’t the first time he has saved an individual with a seizure.

When it comes to handling a person with seizures, he is no stranger. According to Bostic, both his grandfather and sister have frequent seizures. Though it’s different dealing with a stranger instead of family, Bostic still knew what to do, even if it was a situation he might have felt uncomfortable with for personal reasons.

“Last time I saw my granddad when he passed away, he was in the middle of a seizure, so I know how seizures can be. Partly I was kinda like ‘I don’t want to be in this situation’ cause it made me think about my granddad but also I was just like I hope the guy’s okay,” Bostic said. “I hope he’ll be alright.”

It’s hard to see a loved one struggle so much with a medical condition that they can’t control. In Bostic’s case, facing two family members that had the same condition for a period of time was not an easy task, mainly if one person might have to handle it alone.

“It’s hard, especially since somehow my sister has it too. She has random seizures but hers aren’t as serious as my granddad’s. Hers are like little brain out spaces like she’ll walk and then she’ll blackout and lose focus of everything. She’ll drop everything in her hands and hit the wall. At a point, at first, it was kind of difficult to deal with in my life. I [used] to get mad at my sister a lot for just being grumpy and stuff,” Bostic said. “After a while, I had to realize ‘She can’t help it.’ You have to realize that that’s something they can’t control. When it happens, it just happens.”

According to Bostic, primarily his sister’s seizures were difficult and disheartening to deal with. It created tension in the household because there are such negative connotations tied to the word ‘seizure.’

“It made our house uneasy a bit at first because everybody was so worried,” Bostic said. “When you first hear ‘seizures’, you automatically think about the most serious seizure you can think about, but hers were smaller seizures. At first, it was weird because everybody was stressed out like ‘Don’t let her do this, don’t let her do that.’ But then after a while, it just becomes routine like you know if it happens, just help her up, help her get her stuff together.”

Even though Bostic grew up around seizures in the family,  it didn’t affect his decision, in the end, to give the woman aid with her partner. According to Bostic, he would have helped her out either way.

“You gotta help people out.  The world’s not a great place, but there are good people in it. You just gotta help out when you can and hope that good karma comes back on you,” Bostic said.

Many people would consider what Bostic did an act of heroism. It’s not every day that a student is able to save a life. However in Bostic’s eyes, what he did wasn’t heroic. To him, his actions were essential, rational even, given that someone’s life was on the line.

“What would you have done if you were in that place and someone came and helped you? You see them as a hero. But if you helped them, it wouldn’t be that big of a deal because you feel like that’s what you’re supposed to do,” Bostic said. “It’s the right thing. I was always brought up to help people when they need it.”

Arvada is no stranger when it comes to the number of homeless families that walk through the doors. Yet it came as a bit of a surprise to learn that Bostic was one of the several homeless families. Not only that, but Bostic also recognizes how it feels to desperately need help and not receive it.

“I was homeless at a point in my life for two years. I know what it feels like to be on the street and just ask someone for help and they walk right past you. It doesn’t feel good,” Bostic said.

This is a story that hits close to home for many other students who may relate to Bostic’s background. Most people, at one point or other in their life, have been turned down when they’ve asked for help, yet they were refused. This creates a feeling of helplessness and frustration.

“I’ve been in a position where I need help and people just walk by you. It’s the worst feeling ever. You just feel like nothing. Even if you just need money or you need help with a life or death situation, when someone walks past you, you just feel below yourself and it makes you feel like you don’t matter,” Bostic said. “I wouldn’t want a person to feel like that because I felt like that for two years. You shouldn’t want any other person to feel that way either.”